Without a doubt storytelling has been, and will continue to be, an integral part of humanity. The Human Condition delves into the seasons of love and anger, clarity, confusion and everything between and beyond. This anthology is made up of both true and imagined short fiction and poetry — stories that will absorb you with their highs and lows guiding you through what it means to be human. 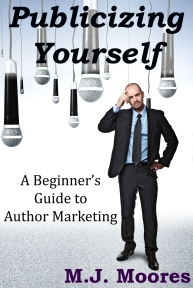 Publicizing Yourself: A Beginner’s Guide to Author Marketing

Authorize yourself with this detailed in-depth marketing resource for new and emerging writers. Whether you self-publish or are a newbie in the traditional publishing market this is an essential starter guide for the industry. With over 40 links to active free and pay websites you will instantly find a way to attract your niche market and begin publicizing yourself with confidence.

Time’s Tempest: The Chronicles of Xannia (Part One)

When time is your enemy and the truth will only get you killed, who’s left to trust as the world threatens to crumble around you?

Embarking as a guide into the death zones that are the Deserts, Taya leads a group of civilians who blindly follow a prophet obsessed with preventing the planet Xannia from environmental self-destruction. Here, fate and destiny wage war propelling an epic search for truth amidst 2000 year old lies, in opposition to a government bent on burying ancient secrets and anyone who goes looking for them.

Cadence of Consequences: The Chronicles of Xannia (Part Two)

She risks losing her life above-ground, in the city she loves, and for what? possibly harming the innocent if she remains hidden below…

Trapped in a foreign Underground world, Taya battles inner demons and alienation as the man she promised to protect… to love… remains firmly planted in the government’s cross-hairs; hell bent on fulfilling his destiny to change the world. Constantly accosted by a fanatic sect of the Followers of Light, praising her as a false goddess in a religion she never truly believed in, Taya searches for something to return a sense of meaning and purpose in her life. As her skepticism for the impending coup grows so too does the Cause’s lack of trust, undermining not only her sense of self-worth but their ability to overthrow a corrupt government.

22 years ago the Resistance failed, ending in the Nine Seas Massacre.

Forced to travel the death-waters of the Nine Seas, the surviving rebels are crammed onto a museum-ship with only an antiquated relic to help keep them alive. But soon, the disparate crew face a living nightmare as a new leader, focused solely on survival of the fittest, takes charge.

Now the fate of the ship rests on the shoulders of two troubled women: Daria, who struggles to find a reason to live; and Sister Venra, whose crisis of faith threatens her life’s purpose. Their inner war amidst tyranny and desperation takes them on a journey that will bring an end to it all … whether by salvation or damnation.