nd now for an update on Campus News.” blasted from Carina’s speaker on her phone.

“The Dean continues to remind students to walk with a friend after dark since the Mysterious Mugger has yet to be found.  The Arts Charity Fundraiser will be hosted this evening in the new wing of the Fine Arts Building.  Big-wigs and Bruisers alike are welcome to come and bid on student art to put a little more change in the Bursaries Purse…”

Carina bites her lower lip as she zooms her telephoto lens in on the prize of the afternoon – her latest assignment for photography.  She has to use one photo to comment on the amalgamation of nature and man.  It would have been better if the bug had been stuck to the gum, but she’ll take what she can get.

Just in time, too – I have to get ready for the fundraiser.

Back at her dorm room, torn, Carina mulls over a black power suit or an orange blouse with cream pants.

“The equipment is black and the wall are orange – do I blend with the walls and let my equipment stand out or do I look like a fancy waiter, blend with my equipment and hope to be mistaken for the staff and ultimately be invisible – Ha!”  -be invisible…

She changes in a flash and loads up her camera equipment into a backpack and shoulder bag.  Only two days ago her photography professor finished interviewing for the position; Carina had been a jittery mess until early this morning when the call finally came to say she was in – one of three official photographers for the Fundraiser.  The other two chosen were upper year students.

The Concierge, set up as Greeter for the evening, found Carina’s name on the staff list without incident.  Verifying her photo ID to the database on his tablet, her let her in.  At three stories high, the foyer of the centre was a glow from the angled glass in the roof.  Last minute touches were being put on several displays as the hour approached to hob-knob-it with the multitudes.

Carina spots Darren setting up the Digital Media display for the film students’ offerings.  He gives her a nod and a sink from across the room.  Needing to get a sense of the space, Carina’s gaze sweeps past him – with the College expecting several big names to bid tonight, Carina wandered through the displays to prepare.

A wail whips through the foyer followed by, “Welcome, welcome one and all – it is I, DJ Manic, here to host the wild-ride that will be tonight-“

“You’re not actually going to introduce yourself like that, are you?” a stern, reasonable voice muffles across the speaker system from a nearby manager.  The mic clicks off.

DJ Manic waves a finger in the manager’s face but remains eerily stoic.  Manic is older than Carina expected but just as crazy as his on-air personality. 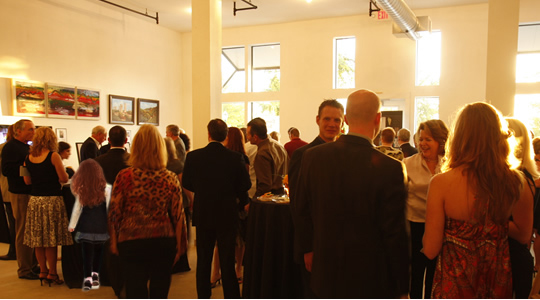 A streak of bright red hair flashes like a fox in amongst the crowd of staff and early arrivals.  Carina doesn’t recognizer her but there are a few of her professors beginning to mingle.

Carina slices through the crowd unnoticed.  Her waif-like form and stealthy use of the camera allow her to get more intimate with her subjects than the other two photographers.  Savouring a slight smile, she raises her camera for another pic.

Her temples throb.  Carina pauses to massage her head before shaking it and her shoulders as if to toss-off the moment.  She glances at the last image on her camera display and frowns.

She clicks back a frame…

She clicks back through her entire repertoire for the evening…

“Hmmmmmmmmmmm… It’s the only one.”

Abandoning her duties, she searches out Darren.

“-and then I got this freaky sense of deja-vu…”

“Really?  Me too, just before you came over.”

“I’ve got a bad feeling about this.  What about you?  How’s your night been so far?”

“Uneventful, really.  Several bids have come in but not nearly what these guys are hoping for.  Still, it gets the work out there and offers exposure for the-“ 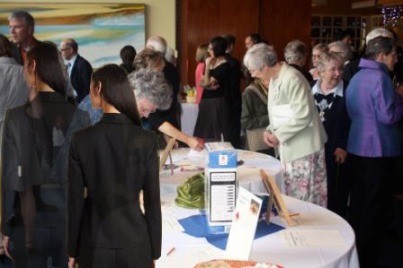 “I have to reminder her about that – doesn’t seem to realize she fazes in and out sometimes.”

DJ Manic calls out, “And the highest bid on this third-year print goes to…Professor Beney!”  The professor receives his picture and three flashes pop.  Carina knows she has the best angle on this one.

“The WILD sculpture of the scantily clad wood nymph has brawn many bids tonight across the board – it may be said she’s one of the highlights of the event!  With a whopping sum of $875.00 for this budding amateur sculptor, Mr. Henley of the Henley Foundation for Lost Souls walks away this beauty!”

“Thank you again, one and all, for a thrilling evening,” DJ Manic panders to the audience.  Darren notices a patch of red on the metal lectern just as dessert is being rolled in.

The metal glows deeper and vibrates.

“The fact that tonight was a cash-if-possible evening makes every donation immediately accessible for the Bursary Funds within the Fine Arts Division of Serenica.” 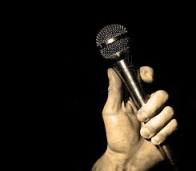 Manic, holding the microphone, walks steadily back from the pulsing stand.

He reaches for the till-box used to store the cash from the evening’s donations and purchases. 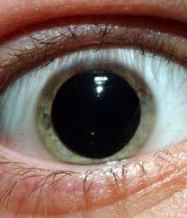 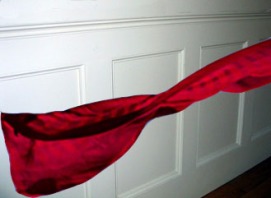 Darren reacts instinctively touching the fruit on the table-

The cash box flies from Manic’s hands and levitates out the side door.

He finds her in a back hall.

“Hide it in your clothes…”  Darren whispers.

From his shielded position, Darren reaches into his jacket pocket for the rice confetti he stashed there earlier in the evening- he whips it at Manic…

Darren glances over his shoulder-

-a shadow slinks off into the night.

He makes eye contact with Carina, speaking with an officer, then returns to the gala to see if help is needed.

On the walk home, much of the way is spent in contemplative silence until Darren finally speaks, “Lucky this time.  People haven’t put two and two together yet, but there was a lot of head-scratcing over the sudden appearance of a blast-dampening blanket.  I overheard one officer say it was likely mischief by a couple of people in cahoots-“

“We’re obviously not the only ones who’ve been affected by the surge in the mainframe.”

“He just touched the metal and activated it like a bomb…

“I don’t have anything concrete, yet, but a photo I snapped tonight is bothering me – as is our joint moment of deja-vu.  I’ve got some questions that need answering… tomorrow… then you can weigh in on what I’m thinking.

“This is messed up.”

Her shoulders go rigid, “This is life now.”  Darren gives her a squeeze and walks her home.