Today’s fiction excerpt from the anthology The Glitch Factory is dedicated on behalf of the author to Nelson Mandela. 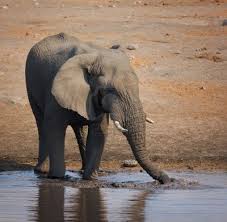 A Representation of the Author’s Original Accompanying Image

Glancing back at the author’s site with one shaped eyebrow raised, she had a moment of indecision about her choice. She rubbed the dry skin of her left knuckle and forefinger aware of the need to expedite her hand lotion from the bathroom into her purse for more regular moisturizing. Again she felt the pull of curiosity, like a young child tugging on the hem of his mom’s jacket, insistent and urgent in his need to gain her eyes and have her follow his as he showed her a rainbow newly formed in the sky. The very one she would have missed as she fumbled for her keys, clutching the mail (a credit card bill), cursing the rain that wet her while toting cloth bags of groceries and sundry other paraphernalia that defined her day.

Margo took the plunge. The story would not be a bullet after all, but a refresh button, she thought. She clicked on the latest posting in the author’s sidebar entitled ‘Elephant Talk’. She molded herself into the wrinkled skin of her modern overstuffed black sofa, the creak and stretch of leather rising to envelop her form. The only missing accoutrement to relaxation mode was a martini and enormously fuzzy slippers, but that was not the stuff of her generation. Her laptop was nestled across her legs. Next to her, on the glass coffee table, was a tall prism shaped tumbler ½ full with water, a lemon slice bobbed on the cold clear surface of the liquid. Next to this was a plate of small rectangles cut and stacked into three bright orange, structurally questionable, towers of cheese. The crackers neatly overlapped in curved arcs around the lactose full buildings, snack city. From this spot in her living room, on an urban street in a global community, she began to read.

The majestic bull elephant stood sturdily on legs like Romanesque columns, a solid foundation for slow, lumbering movement that was as measured and graceful as rolling waves on a day of ocean calm. The large animal approached the waterhole with heavy steps that puffed out dust clouds in his wake. His footprints were large complete circles where the top most circumferences were interrupted by the series of smaller arcs of toes. These were impressed into the loose terracotta of the soft earth, like etchings on a pottery plate. Upon reaching the waterhole, the surface emitted a rare blend of iridescent green edged in an eerie gold light; he dipped his trunk in repeatedly. The appendage, like an animated hose, transported water to his mouth in fluid movements, slaking his thirst under the harangue of the tsetse flies in the intense heat of the African savannah.

As the sun rose, he had wandered away from the herd, odd behavior, counter intuitive for a socialite of the mammal class, but this was no ordinary day. This was the kind of day where you kicked at the can. It rolled predictably forward at a given velocity for a prescribed distance. This was determined by the force of the kick, friction and inclines of the path, and then suddenly, unpredictably, the can flew off into space. Today an elephant would talk and be the only one that did. He would talk merely because he had found a waterhole laced with magic combined with his own odd strain of genetic material. The water had bubbled up from deep inside the earth filling the pocket in the topography of this place, like a reservoir in tropical rains. There was not a single person or internet search that could lend credibility to or uncover the clever copious facts behind this mystery. It was like defining the physics of the Hadron collider to extraterrestrials. For this reason, it would remain a mystery, but let us form conjectures. Take flotsam transports into shape shifting reveries born of imagination, all in the interests of storytelling. It might have been the intervention of aliens, fairies, cyborgs, a mother-in-law, genetic repositioning, new strains of virulent stomach bacterias and or a host of phantasmal characters at work. Enjoy the choice, dear reader.

Margo Liste paused making her choice of explanations. Hm mm an innovative but satisfying interaction with the story offered up by the author, she thought. She was a literary agent by day. I choose an elite race of inventive cyborgs led by a warrior princess from planet Thearth. They have generated an innovative type of water cycle, she decided, giggling at her own invention. The elephant had been altered, a guinea pig for the project. She continued to read.

Approaching the elephant from a distance, covering the space between them quickly, was a child whose stature and size grew when he reached the spot where the elephant waited as if he was a figure drawn in the foreground of a sketch. He greeted the beautiful, powerful creature whose ears flapped in response like giant taro leaves under gentle tropical breezes. The elephant’s trunk reached out, a graceful touch of a hand, to rest the end portion on the young child’s shoulder. Someone else may have flinched, but this boy stood grounded, the touch, a rough caress on his bare shoulders, like corduroy fabric or cracked rubber piping. There was no sign of fear from either one of them as it became obvious that they had met before and were the oddest of companions. The lumbering beast moved in closer to the small child carefully and gently engineered his large weighty mass in slow syncopated movements intended not to collide or knock into the boy. They nestled close, a poetic inscription of large and small.

The boy, Patrick Luga, settled his back against the elongated, rippled cushion of the trunk. From this vantage point, he looked past the dappled patches of green to the ochre of the dry dusty expanse of the savannah, tumble weeds, like crazed grey balls of pencil scribbles, marked the terrain. The brown color, companion to the curiosity of his eyes lifted to the azure dome of the sky. His mind was eager, a sponge absorbing the details of the vast expanse of African grasslands that made up the elephant’s home. He crossed one leg over the other, a casual trust, as he stood propped and enveloped in the solid loving embrace, of the wall, sans graffiti, of elephant.

The child began to speak, a string of simple words, as he pointed up at clouds playfully calling out names for the shapes he saw. The elephant followed his gaze. The large curvilinear shapes and broad brushstrokes of sheer white were made from a union of millions of tiny condensed water droplets, drifting, now, across their vision synthesized into artful forms by the two entranced spectators.

They eventually grew restless with the naming game at which point, the elephant, much to his utter astonishment, eloquently postulated the inherent inconveniences and downright piracy he and others had suffered due to global warming.
“This,” he continued, “was due to over sized carbon footprints as manifested in the humans’ gluttonous appetite for sprawling parking lots over green spaces and the murderous behaviors of poachers.”
Patrick Luga, astounded, abruptly turned fastening his round brown eyes fringed, like the margins of palm leaves, onto the elephant’s mouth. From the dark mouth cave, incomprehensible words tumbled out like ripe coffee beans coloring the space with deep reds, mellow yellows and orange. He gently knocked on the side of his head with the palm of his hand eager to reinstate sense to the present state of nonsense that was rattling around in his mind. Much to his
wonderment, nothing changed as his perceptions were not erroneous but rather steeped in a reality that had just been tinged by magic, like in the fairy tales read to him at bedtime.

Donna Thompson is a Montessori teacher turned writer.  Through networking, a conglomerate of conferences, practice and workshops she has acquired a style of writing that is contemporary.  She likes to think, innovative.  Her first published book is a based on experience, readings, humans and a full bar of imagination.  She enjoys all creative opportunities and is learning to market, painfully.

Thompson loves kayaking, running and sports, as time allows. To dance, sing, learn and give back has always been and continues to be a most fulfilling enterprise. She enjoys conversations of all sorts.  Laundry and household chores keep her grounded and humble along with contemplating the Universe.