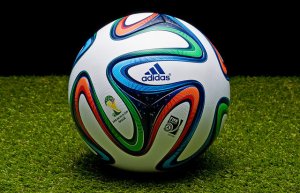 We did not expect this. Being braver than wise
and wearing the arrogance of youth’s season
we took the qualification quite unquestioningly
and run without looking back even once.

It was of course the wrong turning. First we were nagged
by contemptuous sports writers tugging at our outfits like puppies.
Then the rain of doubt began and there was no shelter anywhere,
Only the football field and the rows of stadium seats stern as critics.

Though the blood chilled, the endearing title burnt the tongue.
World Cup champion! Brazil. 2014.
Eventually the comments settled down in exchange for national pride
vacuous like a parading peacock..

At last we left for that veteran country of soccer and samba.
Treated like kings we quickly learnt to behave as such;
We had our hope displayed in the luxury of our accommodations
but found out, after our first night, that they stole it.

We spent many hours in training and never got beaten
until the start of the actual competition.
We waited in vain for the marvelous victory to happen,
went back as old dogs with ferocious barking but lacking teeth to bite with.

Although everyone had predicted it we did not expect this.

Born in 1957 in Belgium. Real name: Jozef L. Faucompret. Caucasian. Publications (mostly under the pseudonym Joseph Avers): prose and poetry in literary magazines and anthologies between 1977 and 1983; afterwards a long interval of non literary activity. In 2007 I moved permanently to the Philippines.From 2012 on again hundreds of publications of prose and poetry in various magazines, anthologies and literary websites in Belgium, Holland and USA.