Auren’s yearly camping trip with her foster father, Kado, turns to disasters when she accidentally lets a demon from the shadow world loose on Luten Isle. She and Kado have little time to hunt it down and return it to where it belongs, before it starts its killing spree.

The Making of a Prequel 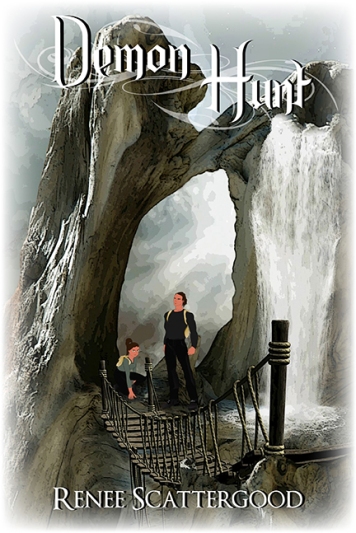 I decided to write Demon Hunt a few months ago. The holidays and the New Year were coming up and I wanted to do something special for my readers. So I decided a prequel might be fun. In the Shadow Stalker episodes I refer to the camping trip Kado and Auren took on Luten Isle the previous year. It seemed that writing about that would be fun.

Coming up with the story was a little difficult. I could think of tons of fun things they could do over the summer, but there’s not much of a story in that. I had to keep with the idea that Kado used those trips as a way to train Auren while she wasn’t in school, so the idea of a training accident popped into my head.

The Demons are dangerous creatures, so I thought, what if one of them somehow escaped… or was accidentally set loose? They would have to hunt it down before it started causing major damage and possibly killing people. That’s how the story for Demon Hunt was born.

Thankfully, I already had fully developed characters to work with from the Shadow Stalker Series. Kado was the first character I had come up with for the series back in 2004. I was reading The Celestine Prophecy and he just popped into my head. But I always knew that he would be a teacher of sorts, so I didn’t want to make him my main character. Instead I decided he would be the main character’s mentor.

At first my main character was going to be male. He was older and had a family of his own. And in this version of Shadow Stalker, Kado didn’t raise him. He had been raised by grandparents who were supposed to turn him over to Kado when he was older for training as a Shadow Stalker. This created too much conflict between the characters though because they didn’t know each other well, and I had also been given advice to make the main character a female.

That’s where Auren came into the story. I made her younger so it would make sense for her to still be living with Kado, and I decided it would be better if he raised her. Once I had those two characters, the story started coming alive in my head as I hope it will in yours too.

Auren longs for adventure and a break from her tedious life on Appolia. It’s the start of summer, and she is looking forward to her yearly camping trip with her foster father, Kado. She believes these trips are for fun, but when they arrive on Luten Isle, Kado informs her that she is a shadow stalker, and she is in training.

With the deadly beast loose, she and Kado don’t have long to hunt it down and return it to where it belongs, or many innocent people could die.

Renee Scattergood, author of the high fantasy series, Shadow Stalker, lives in Australia with her husband and daughter. Aside from writing, she loves reading (Fantasy, of course), watching movies with her family, and doing crafts and science experiments with her daughter.