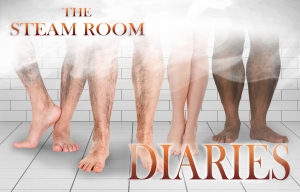 It was a Wilson day. The thought brought a smile even as I descended the stairs from the basketball court to the locker room. It took roughly twenty-seven seconds to shed my clothes in a pile before my locker, grab a towel and head toward the steam room.

All life was sucked out of me when Hamm was the first thing I saw after pulling open the door. Hamm is a nudist, I’d bet fifty dollars on it.

There are all kinds of people in this world, and nearly every one of them has a representative in the men’s locker room at The COE. There are men who slump in their nakedness like someone forced to go out in the rain without a coat, knowing they’ll be drenched whether they walk or run. The shoulders of such men slump forward and round down, their arms hang limp at either side and they walk with dread, their gait something between a shuffle and baby steps.

Other men are driven by a shy modesty, and flock to corner lockers where they can arrange their clothing so everything can be taken off and put on without ever turning around. If they shower at all, these men bring a robe or wear a towel and allow for as little airtime as possible. I am told the women’s locker room has shower stalls for privacy, but our showers, like most men’s locker rooms, are in one open coliseum.

Then there are the peacocks who strut. They don’t just get undressed and shower, they prolong every movement of the locker room symphony by stretching naked in the aisle where others have to walk around them, stand naked at the sink while shaving and brushing teeth, lean naked against a locker while engaged in prolonged conversations even with those who might be fully dressed, or sit naked on the bench reading a book.

I have witnessed such men standing near another man who was getting dressed while spreading apart every fold and crevice of their body as they used a box fan on the floor like a blow dryer. Mind you, these are not all replicas of Greek gods. Fat, thin, muscular or sagging – none is an indicator, nor is the size of their junk. So perhaps they are not strutting at all. They may simply be indifferent about public nakedness. Even so, their very indifference to how others around them may feel reveals a disturbing degree of self-orbit.

The majority of men in the locker room just get it done with a degree of normalcy that draws no attention. Maybe they too experience the whole range of feelings from embarrassed and awkward to precious and preening but their body language is more utilitarian. They just get dressed.

I read somewhere that St. Augustine was catapulted into his reflection that would eventually curse Western Civilization with the notion of “Original Sin,” because of an erection one afternoon in the public baths. He wanted to know why his body would do something his mind didn’t want it to do, and eventually, through some twisted rationalizing contemplation, he arrived at the explanation of original sin through Adam and Eve. That is probably not the first time a hard-on changed the course of human history.

Hamm is a strutter. He doesn’t just sit in the steam room, he lounges in it. Somehow on that narrow bench of tile he seems to flop and spread out as if it were a Lazy Boy recliner. Thank God he doesn’t exercise and stretch the way Frodo does, if he did it would be unbearable.

When I entered the steam room Hamm was already well ensconced, lodged in his usual repose in the far corner across from the cedar slats. I took up a station in the corner by the door where I leaned against one wall and extend my legs so my feet nearly touched the opposing wall.  Not yet quite  settled, the door opened. Wilson!

Wilson is huge. He touches both sides of the door as he wedges through, but as big as he is, his presence is far more accommodating than Hamm’s. Immediately, as the door opened and the room darkened under his shadow, I knew instinctively these two had not yet crossed paths.

Moving with unusual grace for someone so large, Wilson stepped directly toward the cedar slats covering the steam pipes opposite to where Hamm was lounging. I watched, and a grin stretched my lips from ear to ear in anticipation of Hamm’s reaction to the piercing invigoration of steam laced with Eucalyptus oil.

The tiny amber bottle was nearly invisible in the massive mitt of Wilson’s hand as he dripped the fragrant liquid onto the steaming slats. Hamm’s sprawl was fully uncoiled because he hadn’t bothered to open his eyes. I pivoted and put my feet on the floor to offer plenty of room for Wilson as he sat down matter-of-factly between Hamm and me. Immediately the pungent oil escaped on the vapors of steam and Hamm’s eyes widened from slits to half dollars. It was almost like a Loony Tunes cartoon. In the time it took to breathe twice, Hamm was through the door and slamming it shut on us.

“Pussy,” Wilson muttered as laughter shook both our bellies.

I felt the kind of perverse glee that squeezes out any kinder sense of propriety, like when someone falls in a particularly awkward way. The fact it shouldn’t be funny makes the laughter all the more urgent.

Cameron Miller has been writing professionally for decades as a preacher, pastor, retreat and conference leader, and an adjunct professor of religion. Recently he traded that work to dance full time along the imaginative border between fiction, poetry and spiritual reflection. In addition to his published poems and The Steam Room Diaries, he is the preacher behind the curtain at subversivepreacher.org writing articles and essays on spirituality and contemporary culture, as well as publishing weekly sermons. 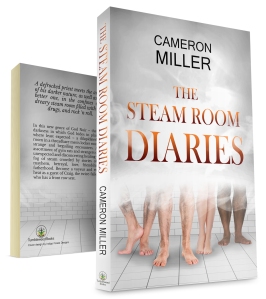