Fiction Friday #35 – Before the New Moon Rises / YA Fantasy 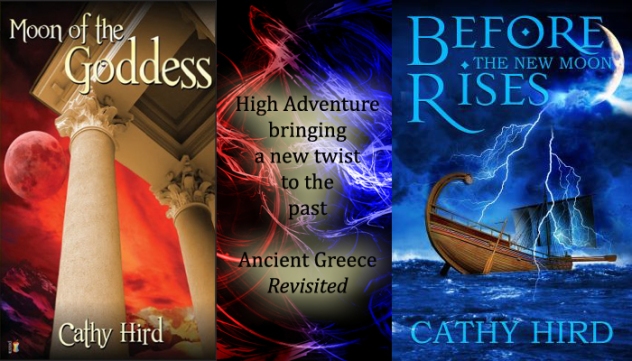 BEFORE THE NEW MOON RISES

The knife sparked as Aphoron slid it along the granite top of the palace guard wall, honing the bronze blade to a killing edge. The rasping sound matched the anger that seethed in his heart, and the knife flashed red as blood in the light of the setting sun. He imagined throwing the blade, cutting Melanion, the prince of Tiryns, who had ruined his plans.

That prince was out of his reach for the moment. Melanion feasted in the palace hall with Aphoron’s father, the king of Ephyra. High ranking merchants of the city had been invited to the celebration, but Aphoron was banished from company to prepare for a test he did not plan to accept.

Aphoron threw the knife at the balustrade. It stuck in the wood and quivered there. If only he could cut the interfering prince as easily.

Aphoron retrieved the knife and returned to sharpening it. They had been so close to moving his city out of its farm-centered quagmire. If his father had shifted his allegiance to the Olympian Poseidon, they could have joined the ranks of trading powers—cities like Corinth, Sparta, and Athens. Instead the old goddess had shown up, and his father had turned away from the power of Olympus. The king had bowed once more to the Mother Goddess Eurynome, and her only interest was dirt and growing things. Thanks to her interference, life in the valley of Ephyra was all barley and olives again.

I’ll make that prince pay! Aphoron threw the knife again. The goddess had convinced his father to promote his younger half-brother until Aphoron showed he could be trusted. Then, she had dared to set him a task, a test of his allegiance. She had the nerve to tell him to go north to Corfu to hunt a monster shark that tormented fishing folk there.

He pulled the knife from the wood. “I am not going on a random quest just because an old goddess tells me to.”

“Then make your own choice.”

Aphoron turned sharply and raised his knife. Poseidon, God of Ocean and Earthshaking, leaned on the wall gazing across the valley.

“Sharp as it is, that knife would not hurt me.” Poseidon spoke quietly, but his voice was cold as the depths of the ocean.

Aphoron glared but lowered the knife. “What are you doing back in our city? The goddess Eurynome banished you.”

“Do not mention the hag.” Poseidon clenched his fist and brought it down hard on the top of the waist high wall. The granite shook. Then, he opened his hands and laid his palms on the stone. “I have an opportunity for you.”

“The last opportunity you offered turned as sour as milk left in the sun. Why should I listen when Eurynome and her minions defeated you?”

“Careful, young prince. Show proper respect, and I may show you a path to revenge and renewed power.”

“Revenge?” The word tasted sweet on Aphoron’s tongue. The idea that he could regain power made his heart pound. He sheathed the knife.

“You can let the hag lead you by the nose or choose your own hunt, a new path where you shape your own future.” The god never looked away from the distant hills. “A son of mine, one of the tribe of Cyclopes, helped build the walls of Tiryns. He keeps a secret that could open an opportunity for you.”

Aphoron studied the profile of the god. His father had granted him only three ships for the hunt in Corfu, not enough for an assault on the city of the offending prince. Yet, if this son of Poseidon knew of a secret weakness, there might be a way. “What do you want me to do?”

“Do what you want.” Poseidon still gazed at the distant mountains. “If you do not act, your brother will be king. Based on his marriage to that delicate young princess, your father will see an opportunity for an alliance with Tiryns, city of the prince you hate. You will lose everything.” He turned and seemed to study Aphoron. “On the other hand, I can open a path for you to take it all back.”

Aphoron turned toward the mountains that the god gazed at. Slowly, a smile came to his lips. “Where do I find your son?”

Cathy Hird is a minister and a mother, a weaver and a shepherd living in rural Ontario. She is a story teller who weaves ancient threads into tales that touch modern questions.  Before the New Moon Rises is Cathy’s second novel. She also writes a weekly column for an on-line news magazine, short stories and some poetry. 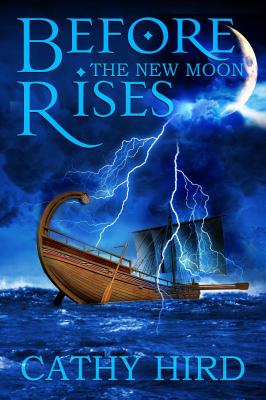 BEFORE THE NEW MOON RISES

When Poseidon’s ambition is thwarted (as told in  Moon of the Goddess), Princess Thalassai expects to enjoy the luxury of peace in the valley of Ephyra. Instead, the Earthshaker’s revenge strikes like forked lightning. He recruits Aphoron, disgraced prince of Ephyra, to set off an attack on her home city. The god then releases a monster shark to shut down trade and lays a sleeping spell on the four kings who hold sway in the lands claimed by the ancient goddess Eurynome.

With the king under Poseidon’s spell, Thalassai struggles to maintain order in the city. Her fiancé Brizo sets sail to defeat the monster shark, but in the first encounter, the shark destroys the ship’s rudder and oars. Her brother Melanion chases after Aphoron and uncovers the prince’s plan to attack their city. As other Olympian gods who are angry with Poseidon are drawn into the fray, conflict threatens to engulf the lands of Greece. Will it spread to the mountain of the gods? Will the young leaders find a way to defeat the Earthshaker’s plans and restore peace?