Common Courtesy Not So Common Anymore 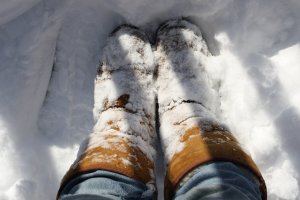 I’m selling my house – the traditional way with an agent and everything that goes along with that headache.  This will be my…. 15th move.  No, I’m not an army brat; I just have a mother who had a hard time settling down.  That being said, it’s really only been my last three moves where I’ve understood the complexities involved in arranging the sale of a house.  I’ve also never put a house on the market in the winter before.

My house has been up for two days with as many viewings so far.  Last night we were asked to leave the blessed warmth of our home right at dinner time, which also pushed the baby’s bedtime back.  Okay.  I expected this.  What I didn’t expect was coming home to find a pool of melted snow in my foyer and two agent cards on my kitchen table.

What’s the deal with the snow, you ask?  I purposefully put out a boot tray beside our ample front door mat for people to use when visiting/viewing.  I know what the weather is like, I go out in it nearly every day.  I know what happens when snow melts, I’ve lived in Canada long enough for that fact to sink in.  I know people can be ignorant, but I keep assuming they’re not – and they keep disappointing me.

And then there’s the issue with the two agents’ business cards: I was under the impression that only one agent would be showing the house to her clients.  The immediate announcement of a second agent’s presence signals to me that they were on a scouting mission.  What I would like to know is why my husband, son, and I had to leave the comfort of our home to allow for two professionals in the field to scan our house?

It’s frustrating having to deal with inconsiderate people.  I get that buyers need me out of the way so they can cut up the place or ooohh and ahhhh at their leisure without me using that against them at a potential purchase down the road – but I could give a damn about catering to a couple of agents who’ll breeze through the house in less than 10 min. and leave a kid-sized swimming pool behind for me to walk through when I get home.  Since when did getting a soaker become an option?

Honestly, you don’t need to spend more than 10 min. in Canada in the winter to know that snow melts when you walk into a warm house.  Furthermore, common courtesy demands that an agent-only viewing be announced to allow for the home owner to relax a little.  Granted, I still wouldn’t be able to make dinner until after they left, but at least I wouldn’t freeze my ass off in the mean time.