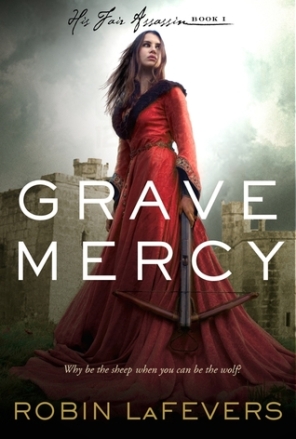 Ismae, sired by Death Himself, scrapes together an existence that barely borders survivable. Not only has she endured open ridicule and hate by her community but servitude to her mother’s husband. The man takes out his rage on Ismae through verbal abuse and daily beatings. As she is spirited to a back wood church to be married to a man she’s never met, her wonder at her pseudo-father’s maniacal glances tells her this new life will be much the same as her previous one. Lying broken and bruised on the cupboard floor of her new home awaiting exorcism from one of the new priests, she is spirited away by seemingly helpful hands to serve yet another master – St. Mortain. Now, as Death’s Handmaiden, her work brings her into the world of politics and nobility where duty and love wage a war as merciless as the one facing Brittany and France.

The action begins immediately setting the stage for the launching of Ismae’s tale. The concept of being a demi-god may not be a new one, but pulling in the Catholic Church’s propensity to amalgamate pagan rites, beliefs, and rituals into its fold works to bring a weight of truth to old saints once worshiped as deities; LaFevers strategically reveals elements of the back story behind the god of Death and Ismae’s near impossible birth until it makes perfect sense that Death is truly a palpable and real being guiding his handmaidens – his daughters.

Anyone taken with medieval war and nobility will relish in the true-to-life detail LaFevers brings to the land of Brittany and its tenuous hold as an independent land from either Britain or France. The sights, smells, and textures of this world bring it a three-dimensionality many debut authors struggle with. La Fevers’ grasp of the political bent of this era brings alive the intrigue and two-faced nature that once ran rampant.

But this story is about so much more than the ripe history it brings the reader; faith, trust, and belief in oneself are ideals constantly being pulled in two or more directions at once. Ismae’s personal growth as a woman and as an instrument of her father is remarkable and chilling. Her friendships and loyalties are strained and tested to the point where Ismae must learn to trust herself in order to do what is right and stay true to her calling.

Lovers of this genre will not be disappointed in this heart wrenching tale which sets a rapid pace from page one. No literary trick are needed here as LaFevers keeps you turning the page well past your bedtime.